Where Demons Hide
Execute the Judgment of Truth (Zechariah 8:16 KJV) Predicated on the written Word of God 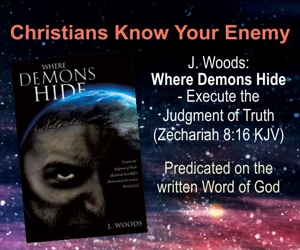 The devil and his demons ride the same malevolent wave of satanic energy and impel themselves into the worldly realm of humanity. Here they thrive on living organisms, the soul of man.

They delve into man’s personality, twisting his thinking, his character traits, his moods his attitudes, and blinds his mind with a cloak of deception where absolute truth is neither known nor attainable.

The invisible part of man, his spirit and soul are inseparable. With their own innate qualities and attributes, the mind, the intellect, the conscience, the ability to reason, to think etc., coexist with these other sadistic aggressive creatures in the spirit realm.

At Shiloh Bible Institute, where James Woods studied the Bible, he had a deep intrinsic interest on wanting to know and understand the beginning of it all. He gained understanding after entering through the gates of knowledge, thus finding there are two-types of creation, leading him on a spiritual journey into the past, present and the future, paralleling both creations.

What awaits you is the answer to how evil originated and how it moves across the face of the earth like a deadly all consuming infectious virus, breathed into the nostrils of the human soul, and inserts a shrewdness of evil to damage the integrity of the soul. Oblivious of it, and its corruption, its victims are now part of it and it is part of them.